The Apartment Association of North Carolina was very active in the election this year with our AANC PAC which performed very well in the election overall with 24 of the 30 recipients of AANC PAC support winning their reelection, including several champions of our industry. The legislative leaders supported by AANC PAC, included the Speaker of the House, President Pro Tem of the Senate and the Chairs of key committees in each chamber, are widely expected to retain these positions in the 2019-2020 session.

The six members who received our support who were not re-elected faced very tough races made harder to win by redistricting and county-specific issues and waves. For example, Republican candidates lost all but two legislative races in Wake and Mecklenburg counties combined, with Democrats winning 28.

All of the legislators above have been consistently strong champions for AANC and our issues and will certainly be missed next session. For example, Rep. Bill Brawley sponsored our Inspection Bill, Rep. Jonathan Jordan sponsored our Private Process Server Bill, Rep. Bradford signed onto all of our legislative priorities and they will be sorely missed by our members.

The irony of the election is that many Republicans who lost their re-election bids were some of the hardest working and most effective legislators. Many of them were moderate and were able to work on both sides of the aisle to find practical solutions to problems – just the kind of legislators that we look for to assist us on the issues faced by the members of the Apartment Association.

NC Senate: Five incumbent Republican members of the NC Senate were defeated, with Democrats successfully breaking the GOP’s supermajority. Republicans will hold a 29-21 majority in the 2019-2020 session but will not have the super majority they need to over-ride any vetoes by the Governor.

NC House: Two incumbent Democrat and 9 incumbent Republican members of the NC House were defeated, with Democrats successfully breaking the GOP’s supermajority in that chamber as well. Republicans will hold a 65-55 majority in the 2019-2020 session.

It is notable that of the 13 total incumbent Republicans who lost, 8 represented districts in Wake or Mecklenburg Counties. Sens. John Alexander (Wake) and Dan Bishop (Mecklenburg) will be the only Republican legislators in the delegations of our state’s two most populous counties.

Special Session (November 27th): As we write this legislative update the General Assembly (2017-2018) is in a special session which is considered a lame duck session as legislators who lost their seats are still serving until the beginning of the next session. So far legislators are taking up the details regarding requiring photo ID to vote (which was just approved by voters), providing more hurricane relief funding, changing some economic development laws to allow them to provide more incentives to businesses and making some appointments to various regulatory committees. There are very few limitations on what issues can be taken up by the legislature during this session so everyone is on high alert until they leave town.

2019-2020 Legislative Session Preview: Although the Republicans still have majorities in both the House and the Senate, there will clearly be a shift in how legislation is crafted. The Governor and the Democrats will have a lot more influence in legislation and the budget since the Governor can veto bills and the budget and the Republicans will not be able to over-ride those vetoes without help from Democrats. There should be more compromise and discussion on policy decisions but we will see how the session unfolds and how the Republicans react to the stronger minority party!

The Apartment Association will be working to protect its members from unreasonable laws or regulations and support pro-business policies. Specifically, we will be working on the following priority items:

The goal of this monthly call is to hear a legislative update from around the state. You will hear what is happening at the state level as well as local updates.

What a Year for the AANC PAC! 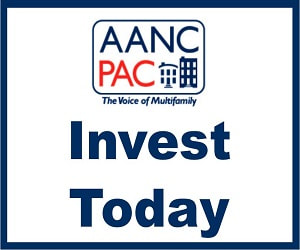 As 2018 draws to a close, I want to take this opportunity to thank all of those that support our industry by contributing to the AANC PAC. From the coast to the mountains of North Carolina, the AANC membership committed their time and resources to further our legislative cause, thus protecting our industry and its residents.

The PAC continued with another record-breaking year in both fundraising and campaign dollars contributed. With the hard work of our membership our industry overcame many legislative obstacles  this year. However, the work is not over. While the November elections may be behind us our fundraising efforts and legislative challenges never end. We must remain ever present in the electoral process, public policy, and mindful of every legislative need or issue that may help or hurt our collective interest. We accomplish this by building and maintaining relationships with lawmakers and supporting the AANC PAC.

Now is the time to replensih the AANC PAC's financial coffers. If you have not already contributed to the PAC, please do so now. If you have already contributed, please consider contributing again. If you want to get involved or have any interest in volunteering, please email me at jtee@paragonservicesgroup.com. Thank ou again and I hope the holidays treat you well! 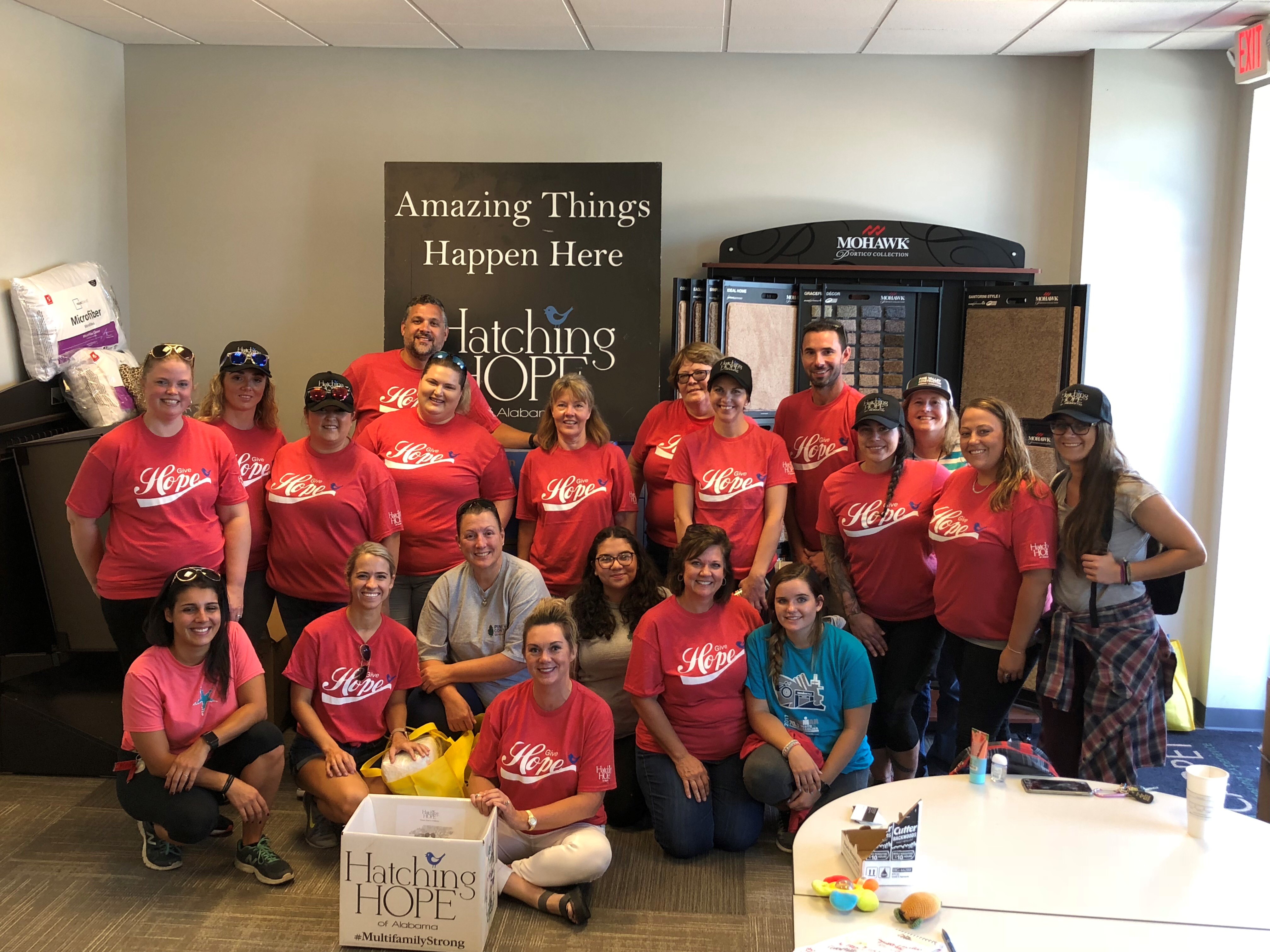 Thank you for all of your support over these last few months as we worked with Hatching Hope to bring relief items to the Wilmington area. A few updates we wanted to share: 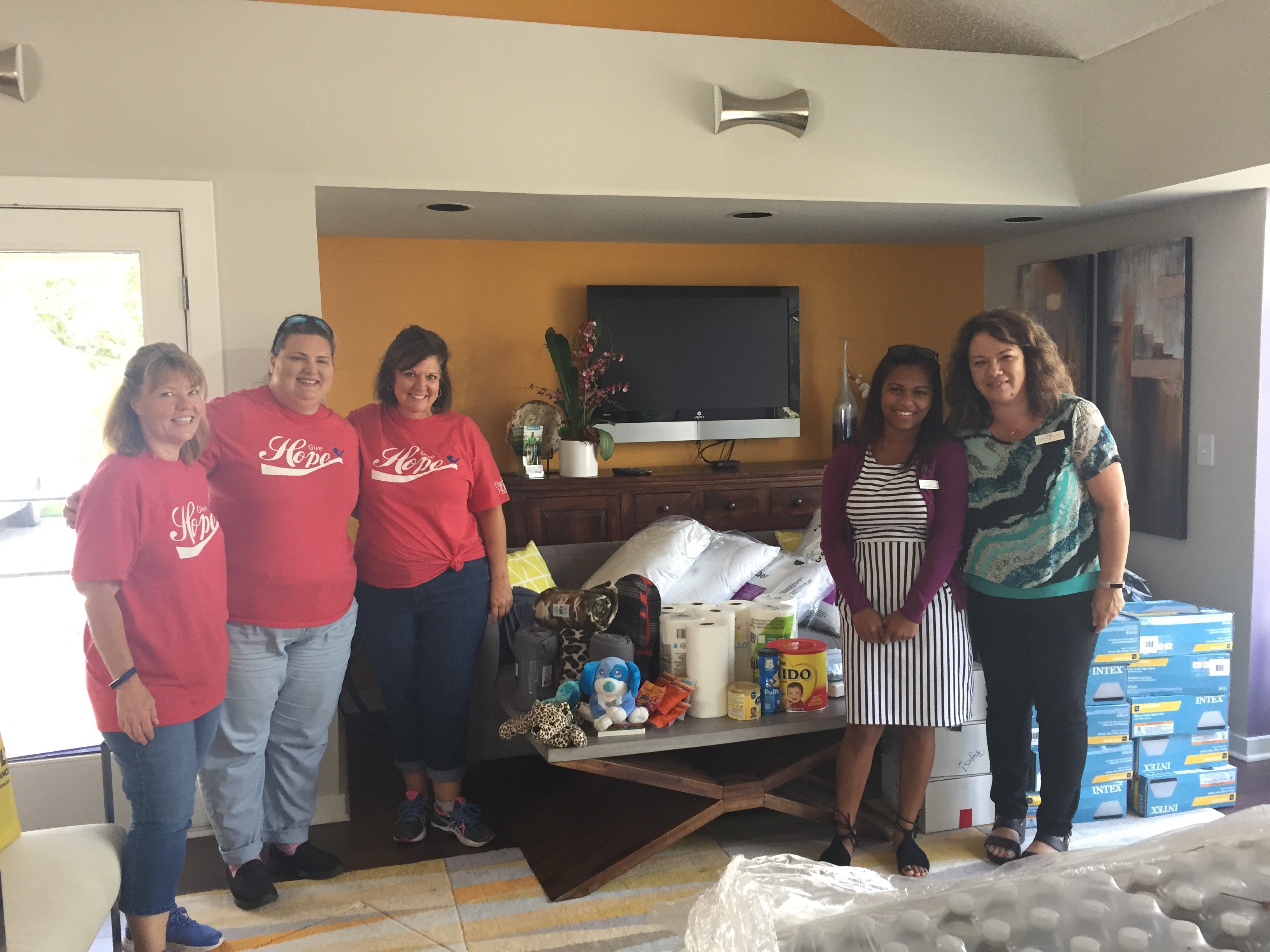 And, thank all of you for donating financially, sharing communications, and sharing Hatching Hope's social media posts with your networks. 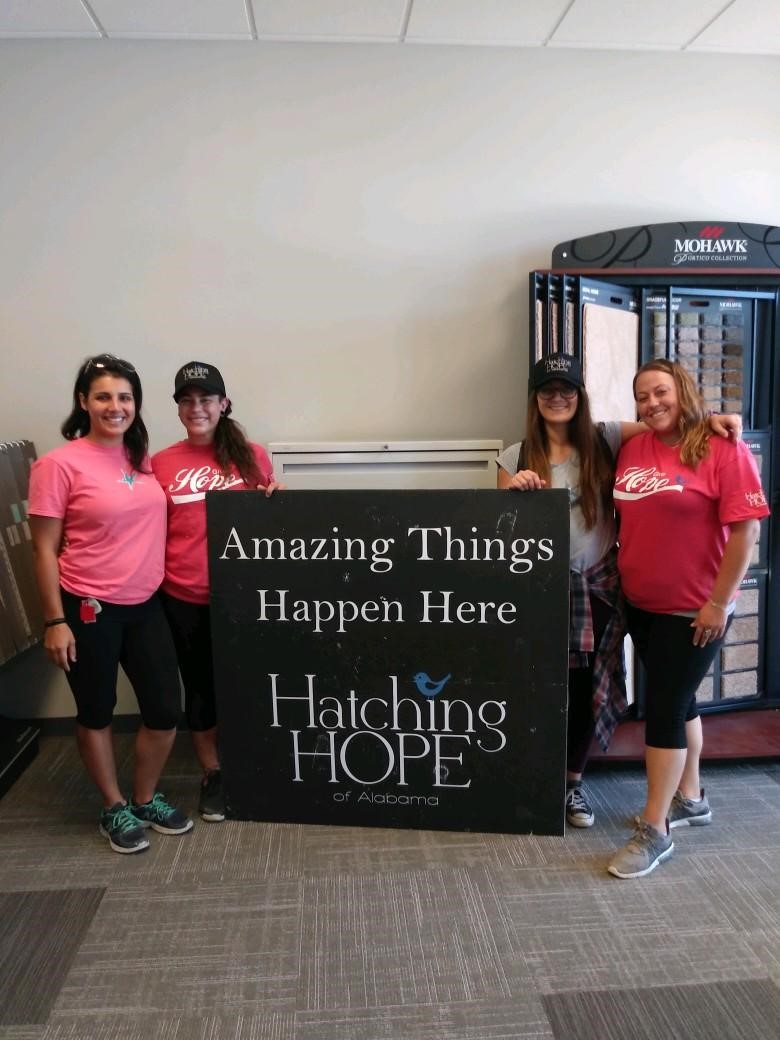 It's not too late - there is still time to help those affected by Hurricane Florence. 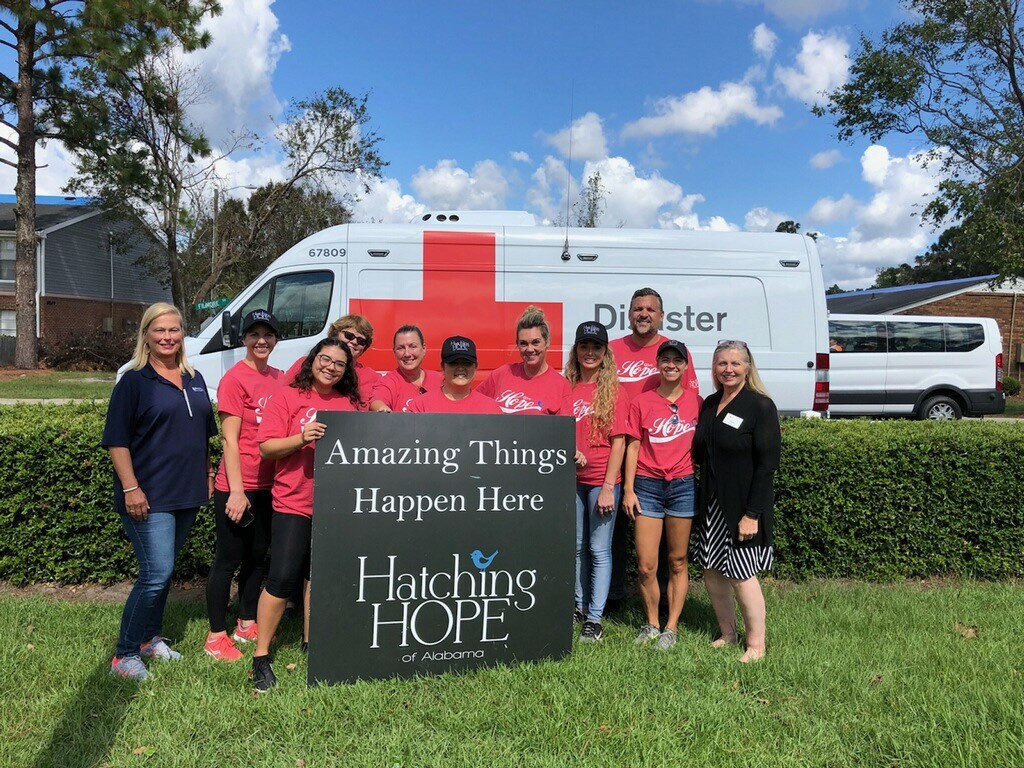 Tis The Season Of Giving

How are you giving back this holiday season? Are you collecting food for food drive, toys for a toy drive, or other? Let us know for a chance to win $100 toward your charity!

Hurry! The sooner you submit, the more opportunity you have to engage your social networks!

“We are extremely pleased to welcome Kim as our new executive director,” said Jennings Snider, president of the GCAA board of directors and Chief Financial Officer with SYNCO Properties. “Kim is an outstanding fit for us, given her strong background in housing, public policy, community engagement and nonprofits. Her management and interpersonal skills are peerless. This is a landmark day for the GCAA.”

Graham most recently served as senior vice president of outreach and fund development with The Housing Partnership, a Charlotte-based housing nonprofit corporation. She will assume her duties on December 1, replacing Ken Szymanski, who will retire at the end of 2018 concluding an illustrious 32-year tenure as GCAA’s executive director.

“I’m honored to have been selected by the board to lead this dynamic organization. I look forward to building on the foundation created by Ken, the professional staff, engaged board and members at the Greater Charlotte Apartment Association,” said Graham.

During her time with The Housing Partnership, Graham doubled the organization’s grant revenue while implementing place-based programs to protect seniors from tax lien foreclosure and expanded access to resources for neighborhood improvement projects. Graham’s experience also includes stints with United Way of Central Carolinas as its public policy manager and with the NC Parent Teachers Association as a regional program manager. Prior to that, Graham worked in the private sector for national and mid-market public accounting firms.

Graham holds a Bachelor of Arts degree in English from Johnson C. Smith University and a Master of Public Administration degree in urban management and policy from the University of North Carolina at Charlotte.

“This is an exciting day for the Greater Charlotte Apartment Association. Kim has the consensus-building tools, insight and resolve to ensure that we grow and stay relevant. Her skills and demeanor are such a good fit for the GCAA,” said Szymanski.

Ken Szymanski, AICP, Executive Director of the Greater Charlotte Apartment Association (GCAA), received one of the NAA’s highest honors, the NAA Lifetime Achievement Award, on Nov. 17 during the Assembly of Delegates meeting in Phoenix.

A determined advocate for the apartment industry, throughout his career Szymanski has been respected for his expertise, keen sense of strategy and diplomacy, according to his peers. “With a mind for fairness, and the wisdom to compromise when appropriate, Ken has the distinctive ability to marry groups with disparate agendas to achieve reasonable change,” Mary Gwyn, Apartment Dynamics, High Point, N.C., says.

Szymanski, whose masters’ degree thesis written in 1974 at Western Kentucky University was titled “The Dynamics of Neighborhood Racial Change,” worked with the GCAA Seminar Committee to create a fair housing course, which was sanctioned by the North Carolina Real Estate Commission and linked to NAA through the NAA Education Institute’s continuing education credit mechanism.

Szymanski took over GCAA in 1986 and has helped its membership rise from 30,000 members to more than 150,000. AANC is NAA’s fifth-largest state association. Says Piedmont Triad Apartment Association Executive Director Jon Lowder, “his legacy is that he did everything in his power to serve the apartment industry and our communities as effectively as possible.”

The NAA Lifetime Achievement Award recognizes the contributions of NAA supplier partners and association executives for their long-term history of exemplary national service and accomplishments to the National Apartment Association and the rental housing industry.

Thank You To Our E-Notes Advertisers 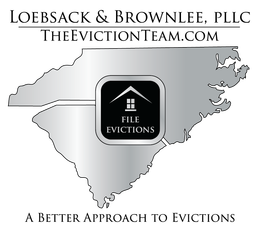